Discipleship in Community as an Orthodox paradigm for mission

Edward Rommen  Into all the World : An Orthodox Theology of Mission: 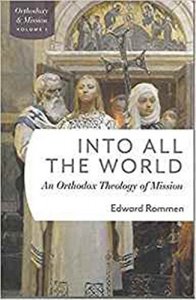 Rommen will be well known to many of us as the author of Come and See: An Eastern Orthodox Perspective on Contextualisation , so it is no surprise to find him here as the author of the first volume in the new SVP Orthodoxy and Mission Series. There is a growing literature on the renaissance of Orthodox mission in the post-Maxist, post-modern era, but somewhat of a dearth of writing on the Orthodox theology of mission. Rommen’s current volume in a valuable addition in this area. He approaches his task as someone who has benefited for a deep exposure to Protestant missiology and is able to both appreciate and critique this from a clearly Orthodox perspective. This volume, however, is not simply a response to evangelical missiology, of which he is highly critical at some points, but rather a serious fresh expression of a distinctly Orthodox missiology.

After a brief review of some aspects of the history of Orthodox mission and the development of a working definition of missiology in part 1 of the book, Rommen then turns, in part 2, to address, in chapters 4, 5 and 6, the roots of Orthodox mission in the Biblical cannon and the tradition of the Church. It is in these chapters that the character of Orthodox mission is made clear. For Rommen mission is both God’s mission (missio Dei) and universal in intent and is focused on the making, baptising and teaching of disciples rather than the making of converts or the growth of the church. The concept of discipleship which is closely allied to the process of deification (theosis) is crucial to Rommen’s thesis (chapter 7) and it is at this point that he is most critical of the perceived evangelical focus on conversion and adding numbers to the Church. Much of his critique of evangelicalism is justified but at one or two points I felt he was addressing the evangelical missions movement of the last century rather than the contemporary, post-Lausanne (1974), reality. The most interesting part of the book for me was when Rommen brings together (in chapter 7) his understandings of discipleship and Eucharistic community. “Orthodox soteriology determines that the goal of mission is not just conversion, but the whole process of discipleship.” (p.196) is followed by, “discipleship can never be a private affair. The disciple is incorporated through baptism into the community to which he or she contributes and in which the Eucharist sustains him.” (p.205).

Chapter 8 is both one of the most crucial sections of his argument but also, probably, the hardest chapter for evangelical readers. The focus here is on ecclesiology, the form and nature of the Church, as the ‘Sitz im Leben’ for mission. It is the Church which is the only point of departure, the only means and the final destination of mission. In some ways this assertion should be no surprise coming from an Orthodox theologian, and could be seen as helpfully bringing together missiology and ecclesiology in a way that would be acceptable to many evangelicals, but Rommen’s practical application of this thesis is difficult. The continuity he expresses between discipleship and Eucharistic community is positive and encouraging but his assertions that, for example, “mission cannot take place through the agency of para-church organisations” (p.211) and “The bishop and not the academy is the primary source of missiological instruction and thought in the Church” (p.261) are challenging.

I highly recommend this text to both Orthodox and evangelical readers and encourage you to overlook the few places where his critique of evangelical mission is, I believe, rather dated (with references to ‘missions’ rather than ‘mission’) and take time to reflect on the centrality of lifelong discipleship in the context of Eucharistic community as a primary model for mission.