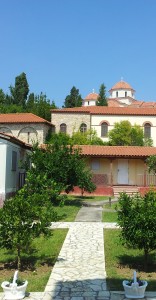 It was held on:

at the monastery of St. Vlash, Albania

Participation was by invitation with around 60 Orthodox (both Oriental and Eastern) and Evangelical Leaders attending at the invitation of His Beatitude Archbishop Anastasios.  Many topics were considered but four of the most critical were:

The links above will take you to a few suggested resources and background reading on each of these topics.

This was not a conference or colloquium with specialist speakers but rather an opportunity for genuine consultation. For this reason considerable time was given to small group discussions, both formal and informal, which formed an important part of our interaction together.

Bible Study and Prayer were an important part of our time together. Each morning one of our participants led us in a Biblical reflection on the theme of the days discussions. We  also had opportunities to experience the prayer and worship traditions of our different communities.

On Tuesday 16 September the Consultation included an Orthodox-Evangelical gathering of Albania Youth.