Since its founding in 1993, the EWC&M Report has covered all aspects of church life in post-Soviet states, with special attention devoted to the interface of Orthodox, Protestant, and Catholic confessions. The report is included in EBSCO’s Academic Search International database.

In 2020, Mark Elliott (Editor Emeritus, East-West Church Report, www.eastwestreport.org) released a book with First Fruits Press, The Arduous Path of Post-Soviet Protestant Theological Education. This is a compilation of his articles on the subject from 1993 through 2020.  It is available to be read or downloaded freely at: https://place.asburyseminary.edu/academicbooks/35/.

The print version of this journal ceased to appear after 2012, but an online edition, Occasional Papers on Religion in Eastern Europe, continues to appear. The website makes many relevant articles available for download. 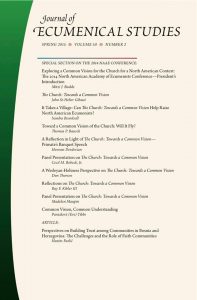 Tim Grass, response to the Anglican-Orthodox dialogue statement, The Church of the Triune God (2008). This was written at the request of Martin Davie of the Church of England’sCouncil for Christian Unity.

D. Oliver Herbel, Turning to Tradition: Converts and the Making of an American Orthodox Church, New York: OUP, 2014. Includes two chapters on the Evangelical Orthodox Church which was led by Fr Peter Gillquist

Dan Sandu, ‘The Evangelising Orthodoxy Revisited’.
This paper, hitherto unpublished in English, offers an Orthodox rationale for the necessity of evangelism, which it contrasts with what it sees as Evangelical propagandizing. Even those who disagree with aspects of its critique should welcome its positive exposition.

Walter Sawatsky, ‘Inter-Church Mission dialogue: Orthodox, Catholic, Protestant and Evangelical’, pages 164-86 [please e-mail if you can tell me which book this is from]

David P. Teague, Godly Servants: Discipleship and Spiritual Formation for Missionaries (revised edn Trinity Discipleship ministries, 2018), 194 pages, available as hard copy or e-book.
The Amazon page says:
‘The purpose of GODLY SERVANTS is to help evangelical missionaries to deepen their Christian spirituality. While many books are now available about spiritual formation, little has been written specifically for missionaries. Missionary life presents its own unique challenges that require a specialized treatment. GODLY SERVANTS explains spiritual formation clearly and has abundant, practical applications. Dr David Teague served as a missionary in the Middle East and is now a seminary lecturer and pastor. He especially brings to his writing a familiarity with the spirituality of the Desert Fathers and Mothers of Egypt. This book is an outgrowth of the seminars on spiritual formation which his team conducted for Interserve, an evangelical mission with over 800 workers in more than 30 countries.’

Works on the Early Church Fathers

Evangelicals and the Early Church:

If you are aware of resources we should be listing here please send them (or information about them) to lausanneorthodox@gmail.com