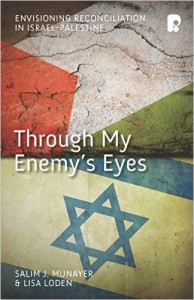 At recent LOI consultations it was been clear that the Gospel requires us to be active ministers of reconciliation both in the wider community and within the Body of Christ. At our 2015 consultation Lisa Loden was one of those helping us to address this challenging topic. Now, as Christians from Jewish and Palestinian backgrounds, Lisa has teamed up with Salim Munayer to give us Through my Enemy’s Eyes.

In commending the book Chris Wright, International Ministries Director, Langham Partnership, UK , writes, “In a world that wants to see only one side of every conflict (and this one especially), where people believe only their own propaganda, and where many Christians inhabit hard shells of theological, political and apocalyptic certainties, this book is a bravely different voice. Rather, it is two voices talking carefully, honestly, graciously, respectfully and truthfully to each other – as sisters and brothers in the Messiah should. This is a unique conversation in which each partner, Messianic Jewish Israeli and Palestinian Christian, gives full expression to all that they are and think and feel about themselves and the conflict in their land. We are treated to some stretching theological debate and some honest self-criticism. But above all we come to share the hope and courage that shines through the pain and struggle.”