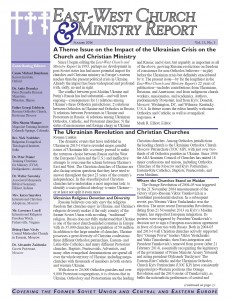 At the LOI consultation in 2013 one of our participants was Dr. Mark Elliott the editor of East-West Church and Ministry Report.  In the past few months Mark has focused his analytical attention almost entirely on the crisis in Ukraine and its impact on Christian ministry and mission.  This has resulted in a major edition of the East-West Church & Ministry Report which contains very important articles and analysis. The good news is that a special grant enables Dr. Elliott to make this report available to us at no cost.  Please download your copy (in English, Russian or Ukrainian) here:

“Dear Colleagues,  I want to introduce you to a special issue of the East-West Church and Ministry Report  (http://eastwestreport.org ), dedicated to the impact of the Ukraine crisis on churches and ministry in Ukraine and Russia.
Since 1993 the East-West Church and Ministry Report has regularly published articles by prominent church and mission leaders, missionaries,  and faculty of theological schools: Grigori Komendant, Peter Kuzmic, Sergei Sannikov, Parush Parushev, Peter Penner, Alexander Negrov, Insur Shamgunov, Konstantin Prokhorov, Walter Sawatsky, Sergei Rakhuba, Alexei Melnychuk, Michael Cherenkov, Igor Petrov, Mary Raber, Donald Fairbairn, Johannes Reimer, Roman Lunkin, Lyudmila Filipovic, Oleg Turlac, Anatoly Kolodny, Yakov Krotov, etc.
In his introduction to the Ukraine theme issue of the East-West Church and Ministry Report Editor Mark R. Elliott notes that the political and military crisis in Ukraine is having and will have profound and lasting effects upon: 1)  relationships among the three Orthodox churches in Ukraine; 2) the relationship between  Orthodox churches in Russia and Ukraine; 3) the relationship between  Protestants in Ukraine and Russia; 4) the relationship among Orthodox, Catholic, and Protestant churches in Ukraine; 5) the status of foreign missionaries and clergy in Ukraine and Russia; and last but perhaps no less important,  6) the increasing infringement upon freedom of religion for non-Orthodox churches in Russia, which began even before the Ukraine crisis, but which has increased markedly as a result of it.
Because of the serious ramifications of the Ukraine crisis for believers in Ukraine and Russia, the present Ukraine theme issue of the East-West Church and Ministry Report may be the most significant undertaking of the EWC&M Report in the 22 years of its existence.  The issue includes articles by Ukrainian, Russian, and American missionaries, academics, and attorneys from Kyiv, Donetsk, Moscow, Washington, DC, and Wilmore, Kentucky (USA).
Editor Mark R. Elliott hopes to publish articles on the impact of the Ukraine crisis in future issues of the EWC&M Report from Orthodox and Catholic as well as Protestant contributors. To submit an article or letter to the editor in  response to the Ukraine theme issue of the EWC&M Report, contact Dr. Mark R. Elliott,  Asbury University, One Macklem Drive, Wilmore, Kentucky 40390 USA;  or emark936@gmail.com . All the best in the Lord,